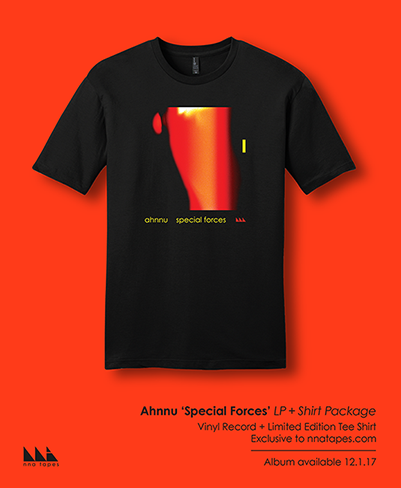 We’re delighted to welcome Los Angeles-based producer Ahnnu, aka Leland Jackson, back to NNA Tapes to share his brilliant new full-length album ‘Special Forces.’ Over the years, Jackson has made his mark on the world of electronic music production not only with his innovative works as Ahnnu, but with his footwork/dance alias Cakedog as well. Following up the 2013 NNA release ‘Battered Sphinx,’ and more recently 2015’s ‘Perception’ on Leaving Records, Ahnnu returns to push his sound collage expeditions further into the deep beyond by excavating fragments and ethos from music history’s past and infusing them with the electronic frequencies of a future landscape.

‘Special Forces’ manifests as series of thematic, stripped-down electronic works, brought to life through the thoughtful arrangement of dynamic new sounds in combinations that produce maximum effects from minimal presence. This less-is-more approach conjures a distinct array of moods and emotions through pure sound, gaining power through repetition and the subtle compositional shifts that disrupt them. Rhythm and melody often interlock as one through forward-thinking sequencing, prompting delicate hypnosis through complex syncopation. More than ever, Ahnnu operates within a highly unique sound palette unlike anything else happening in contemporary music. Though unlike his previous work, there are very few samples on ‘Special Forces’ – Jackson instead opts to turn the sampling process on himself, extracting and manipulating fragments of his own personal experiments with electronic synthesis and patch creation, reanimating them as he would with the traditional sampling of field recordings or other music. Ahnnu’s roots in left-field beatmaking are retained on these recordings, and his originality lies in his use of the production techniques and processes of hip-hop, dance music, and street artforms to produce high brow experimental works.

The resulting tracks often evoke a jagged science fiction – the calibration of starship bridge equipment, extra terrestrial cafe ambiance, snippets of robotic conversational clamor on a sandcrawler Uber ride, or the gripping tension of radar blips while tracking the enemy through a VR headset. Jackson’s work with dance music as Cakedog shines through at moments in tracks like “Latro” and “War Stage,” with subtle melodic House-style chords and traditional kicks and hi-hats permeating the mix. Above all, ’Special Forces’ seems to trace the lineage of early electronic music through its most formative stages, carrying the essence of the fervent discovery of new, exciting sounds through the embracing of technology. The album also seems to draw inspiration from ideologies such as Debussy’s “tone poems” and Satie’s “wallpaper music,” up through the original tenements of Ambient music established by Eno, Fripp, and other pioneers. The sounds of cold mechanics and electricity are given life through innovative production, effective composition, and gestural phrasing, while retaining the life and vivacity of the expressionist tendencies of jazz and classical music. This is music that sounds as though it could be familiar throughout the cosmos, but remains as-of-yet undiscovered in the current third dimensional time/space of our earthly realm.

Stream ‘Special Forces’ in it’s entirety for a limited time, plus read an interview & write-up, courtesy of Vice’s Noisey