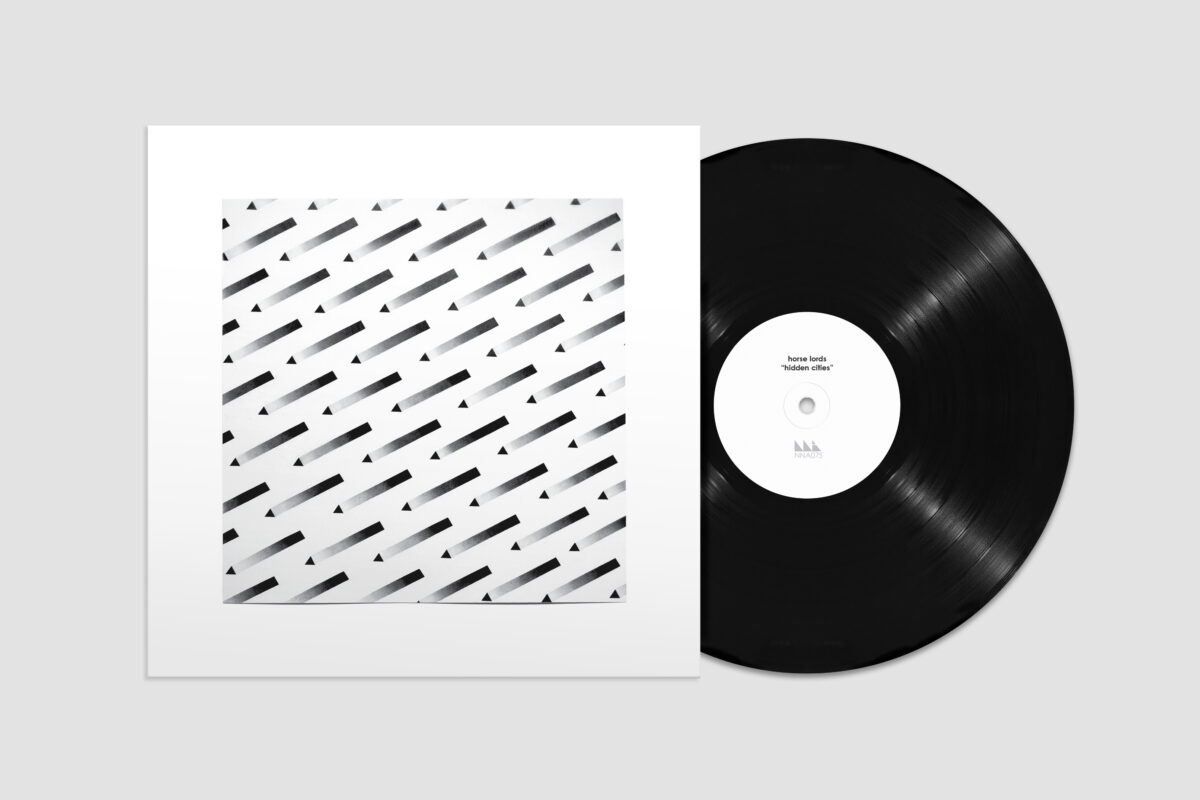 Horse Lords’ 2014 LP ‘Hidden Cities’ is back in stock! Available from our shop and on Bandcamp.

On opening track “Outer East” the band showcases its considerable range and sick chops: over a low-slung motorik groove, Andrew Bernstein spins a smoky web of sax-into-delay that recalls Terry Riley’s “Reed Streams”. The song turns an unexpected corner five minutes in as guitarist Owen Gardner—who has structurally altered his frets into a just intonation tuning system—carves beguiling arabesque figures on top of Max Eilbacher’s insistently funky bass. Sam Haberman then breaks in with a fierce drum solo, from which the whole band erupts into a relentless forward moving ecstatic riff that blurs the difference between prog, no-wave and minimalism. It’s a compressed lesson in the effortless eclecticism and muscular playing that makes this band so mesmerizing live. Following “Outer East” with barely a pause,  “Life Without Dead Time” rides a mutating polyrhythmic grid that showcases the synthesizer and signal processing chops of Eilbacher (whose solo LP “Red Anxiety Tracers” came out to critical acclaim on Spectrum Spools last year).

A gradually building ramp built of field recordings, tape manipulation and modular synthesis, “Tent City” introduces the second long-form composition on the album, “Macaw”. A floor burner at their live shows, “Macaw” builds rhythmic tension and release before coalescing into a unison burst of festivity and abandon. Bernstein’s woodblock figure pulls away from Haberman’s steady beat and the resulting groove plays out like a krautrock duel-in-the-sand between two offset patterns competing for dominance in a vivid strobe effect. By the ten-minute mark, Gardner’s guitar hits a Bo-Diddley-meets-Group-Doueh sweet spot and the track lifts off in a final spiral of ensemble unison hammering. A coda for extremist signal processing, “All That Is Solid” manipulates and processes the record’s preceding riffs into liquid pools of unrecognizably alien new forms, setting you down on the other side of “Hidden Cities” at once startled and becalmed. It’s vital, thrilling, and utterly transcends its many influences to arrive at a new place on the map for forward-thinking American rock music.